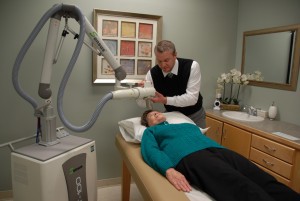 We are in the middle of an epidemic of skin cancers. During the past two decades dermatologists have reported dramatic increases in skin cancer rates among their patients in all 50 states. Why Utah is at the top of the list isn’t well understood, but it’s undeniable. We have more skin cancers than nearly all other states, including states that are more populated than we are. Fortunately, most of the skin cancers we are seeing are the “good kind,” which means that they are usually treatable and rarely fatal. Melanoma, the “bad kind,” is also on the rise, but in terms of numbers, the “good kind” outnumber melanomas and other very rare skin cancers by better than a thousand to one.

Regarding the “good kind,” mostly basal cell and squamous cell cancers, there is good news. For the past 40 years most skin cancers have been treated by surgery in the doctor’s office. Since the majority of skin cancers are small, the surgeries, which are done under local anesthesia, often don’t even require sutures. Larger skin cancers and skin cancers in difficult spots, like the eyelid or nose, sometimes required more complicated procedures with potential complications such as bleeding, infection, scarring, and pain. That was then…(read more)