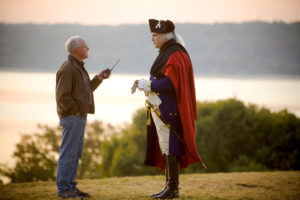 The phrase “Where history comes to life!” has been used to describe everything from museums to battlefield re-enactments, from stage shows to the big screen, and almost everything historical in-between. Now, this oft-used phrase will introduce a highly anticipated documentary film series, focused on the Roots of Knowledge project. In our last issue of Utah Valley Health & Wellness, we shared an article introducing this wonderful art project, which, through a stained-glass art wall display, will tell the history of the world through the advancements of man’s learning and knowledge. As we stated in that article, the stained-glass art wall will be unveiled on the campus of Utah Valley University in November of 2016. In addition to the physical display at UVU, a full eight-hour documentary series will be produced with the goal of bringing to life the stories and events depicted throughout the art-glass wall.

Making this historical piece of art come to life is the job of Utah-based filmmaker Lee Groberg and his team at Groberg Films. Groberg’s experience with historical documentaries is extensive, as he has produced and directed several historical based films, dating back to as early as 1992. When I asked Lee about his approach to taking thousands of years of history, as depicted in the art-glass wall display, and squeezing it into a four-part documentary series, each part being two hours in length, he concluded that this project will be one of his greatest professional challenges. Then again, he admits to having said that same thing before each of his previous historical films.

While discussing the filmmaker’s approach, Lee went on to say that, “We simply turn the clock back by a few thousand years; then, with research, we tackle the topic so that [the film] is believable. These sorts of projects are exciting to consider because of the challenges—with historians, art direction, props, wardrobe and talent—it is factual movie making at its best.”…(read the rest of the story)